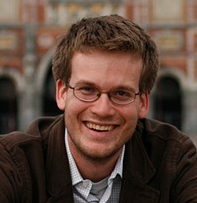 "John Green is the New York Times bestselling author of Looking for Alaska, An Abundance of Katherines, Paper Towns, and The Fault in Our Stars. He is also the coauthor, with David Levithan, of Will Grayson, Will Grayson. He was 2006 recipient of the Michael L. Printz Award, a 2009 Edgar Award winner, and has twice been a finalist for the Los Angeles Times Book Prize. Green’s books have been published in more than a dozen languages. Green’s book reviews have appeared in The New York Times Book Review and Booklist, a wonderful book review journal where he worked as a publishing assistant and production editor while writing Looking for Alaska. Green grew up in Orlando, Florida before attending Indian Springs School and then Kenyon College."

Click on the book covers below for more information regarding John Green's novels.

In addition to writing award-winning novels, John Green is also well known for his highly popular videoblog- Vlog Brothers. Maintained by John and his brother, Hank, Vlog Brothers is a virtual exchange between the Green brothers in which they discuss topics that are often as intellectual as they are hilarious. Vlog Brothers is updated twice a week- Tuesdays and Fridays. Check out the video below to see John's recent post in which he responds to the question: How do I figure out what to do with my life?

As the Vlog Brothers channel grew more popular, a community of fans formed called the nerdfighters. John and Hank started a social networking site to create a space where nerds could come together to "increase awesome and decrease suck." The nerdfighters are also well-known for raising funds and awareness for various charities. To see what the nerds are up to, or to join the community, check out their website.

Continuing with their strong web presence, John and Hank Green also own DFTBA (Don't Forget to be Awesome) Records-an online record label. Visit the DFTBA website to browse albums for sale as well as shirts, posters, bracelets, buttons, and magnets designed for nerdfighters and literature fans alike. Readers might especially enjoy the prints for sale which include quotes from Looking for Alaska and The Fault in Our Stars.