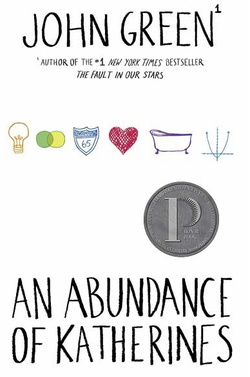 After being dumped by his girlfriend Katherine, eighteen-year-old Colin Singleton decides it is time to hit the road. Seeking a therapeutic summer road trip Colin leaves his native Chicago, meanders south and contemplates how he could possibly have accumulated nineteen breakups all with girls named Katherine.  Green writes a leisurely-paced and engrossing tale following Colin and his best friend, Hassan,  as they reach an unexpected destination, a small town with a lot of personality,

In an effort to recover from the recent breakup, Colin, a former child prodigy, attempts to create a theorem that will explain why he has suffered multiple heartbreaks from the Katherines. Green does not belabor Colin’s mathematical musings, but instead focuses on Colin’s determination to solve his romantic conundrum. Despite some of the more extraordinary aspects of Colin’s character (a knack for anagramming and mastering multiple languages) readers will find his dialogue to be natural and his mission to recover from a broken heart believable.

While An Abundance of Katherines certainly centers around lost love, Green’s inclusion of quirky secondary characters such as Hassan and Lindsey, a punk-turned-prom-queen Tennessee native, keep the story of Colin’s adventure light, endearing, and witty rather than moody and whiney. Green uses a language that is well-crafted and entertaining while also including approachable footnotes and an appendix for readers who are interested in the finer details of Colin’s historical and mathematical references. Young adults will enjoy Green’s well-developed characters, appreciate Colin’s unpretentious journey to self-discovery and find An Abundance of Katherines a thoughtful and amusing read.

What's with the covers?

While it is not unusual to see multiple covers for a single title, it is interesting to note that the most recent AAOK cover (featured in the middle above) was designed by a fan. In the fall of 2011, Penguin issued a a book cover contest in which Green fans  could submit their own designs for the paperback version of AAOK. The contest was  inspired by the multitude of fan-made covers for Green's latest book: The Fault in Our Stars. In early 2012, a panel of judges (including John Green) deemed seventeen-year-old Sarah Turbin's cover the winner. Sarah's design includes whimsical sketches that represent some of the central themes found in the text such as: road trips, mathematics, and love. It is also interesting to note that she included a footnote- a distinct trait of AAOK.  Check out the video below to see John and Sarah discuss the cover contest in more detail.

Want more information involving An Abundance of Katherines? Check out the links below!

Looking for reviews? Check out Kirkus or Publishers Weekly.

Just for fun...check out Cafe Selmarie's website. A Lincoln Square restaurant and bakery, Cafe Selmarie is mentioned in AAOK as serving exceptional coffee (it's true, they do).