While AAOK covers multiple themes, at the center of the story is Colin's need to solve his romantic dilemma regarding the Katherines. Interestingly, as Colin tries to recover from his most recent break-up in Tennessee, he meets the intriguing and amusing Lindsey who might just break the Katherine cycle. For the readers who enjoyed the love story, and let's face it, the getting dumped aspect of AAOK, check out the read alike suggestions listed below.

The Accidental Genius of Weasel High by Rick Detorie 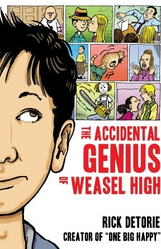 Comprised of a series of journal entries and comic strips, this engaging book tells the story of fourteen-year-old Larkin Pace who names himself an "accidental genius" due to his impressive ability to memorize every line from any movie he has ever seen. Larkin is faced with believable teenage experiences- an annoying sibling, a high school bully, an unusual best friend, and an almost painful crush on his childhood friend, Brooke. Young readers will identify with Larkin's tales of being a high school freshman and adults will find this chronicle of adolescence nostalgic.

Check out what other readers are saying about The Accidental Genius of Weasel High here.

The Cardturner by Louis Sachar 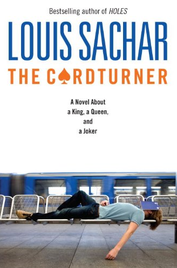 Summer vacation looks grim for seventeen-year-old Alton Richards. After being dumped by his girlfriend (who left him for his best friend), Alton is informed by his parents that he will spend the summer driving his wealthy uncle to bridge club and serving as his cardturner. Alton is less than pleased with his parents' attempts for him to get written into his uncle's will after spending one summer together. While Sachar includes descriptions of bridge and Alton's mastering of the game, the novel focuses on the development of Alton's relationship with his uncle and his observations of ex-girlfriends, parents, and the intriguing, bridge-playing Toni Castaneda. Readers will enjoy this Newbery-winning author's tale of family, romance, and cards.

Check out what other readers are saying about The Cardturner here. 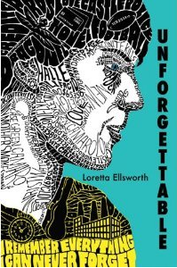 Fifteen-year-old Baxter as the unique ability to remember just about everything. He remembers details from every day of his life- from the small events such as the meals he ate, to the significant memories like those of his father who passed away when Baxter was a small child. Seeking a fresh start after his mother's criminal ex-boyfriend is released from jail, Baxter and his mom travel to Wellington, Minnesota, home of Baxter's childhood crush Halle. Wanting to blend in with the crowd, Baxter keeps his remarkable ability a secret as he tries to reconnect with Halle (who does not remember him from their kindergarten days). Ellsworth tells a sweet love story intertwined in a tale about the adolescent need to fit in with the crowd.

Check out what other readers are saying about Unforgettable here.